Doctors Warn: Avoid Against Genetic-Modification of our Food Crops

On May 19th, the American Academy of Environmental Medicine (AAEM) called on "Physicians to educate their patients, the medical community, and the public to avoid GM (genetically modified) foods when possible and provide educational materials concerning GM foods and health risks."[1]

They called for a moratorium on GM foods, long-term independent studies, and labeling. AAEM’s position paper stated, "Several animal studies indicate serious health risks associated with GM food," including infertility, immune problems, accelerated aging, insulin regulation, and changes in major organs and the gastrointestinal system. They conclude, "There is more than a casual association between GM foods and adverse health effects. There is causation," as defined by recognized scientific criteria. "The strength of association and consistency between GM foods and disease is confirmed in several animal studies."

More and more doctors are already prescribing GM-free diets. Dr. Amy Dean, a Michigan internal medicine specialist, and board member of AAEM says, "I strongly recommend patients eat strictly non-genetically modified foods." Ohio allergist Dr. John Boyles says "I used to test for soy allergies all the time, but now that soy is genetically engineered, it is so dangerous that I tell people never to eat it."

Dr. Jennifer Armstrong, President of AAEM, says, "Physicians are probably seeing the effects in their patients, but need to know how to ask the right questions." World renowned biologist Pushpa M. Bhargava goes one step further. After reviewing more than 600 scientific journals, he concludes that genetically modified organisms (GMOs) are a major contributor to the sharply deteriorating health of Americans.

Among the population, biologist David Schubert of the Salk Institute warns that "children are the most likely to be adversely effected by toxins and other dietary problems" related to GM foods. He says without adequate studies, the children become "the experimental animals."[2]

The experience of actual GM-fed experimental animals is scary. When GM soy was fed to female rats, most of their babies died within three weeks—compared to a 10% death rate among the control group fed natural soy.[3] The GM-fed babies were also smaller, and later had problems getting pregnant.[4]

When male rats were fed GM soy, their testicles actually changed color—from the normal pink to dark blue.[5] Mice fed GM soy had altered young sperm.[6] Even the embryos of GM fed parent mice had significant changes in their DNA.[7] Mice fed GM corn in an Austrian government study had fewer babies, which were also smaller than normal.[8]

Reproductive problems also plague livestock. Investigations in the state of Haryana, India revealed that most buffalo that ate GM cottonseed had complications such as premature deliveries, abortions, infertility, and prolapsed uteruses. Many calves died. In the US, about two dozen farmers reported thousands of pigs became sterile after consuming certain GM corn varieties. Some had false pregnancies; others gave birth to bags of water. Cows and bulls also became infertile when fed the same corn.[9]

In the US population, the incidence of low birth weight babies, infertility, and infant mortality are all escalating.

GM corn and cotton are engineered to produce their own built-in pesticide in every cell. When bugs bite the plant, the poison splits open their stomach and kills them. Biotech companies claim that the pesticide, called Bt—produced from soil bacteria Bacillus thuringiensis—has a history of safe use, since organic farmers and others use Bt bacteria spray for natural insect control. Genetic engineers insert Bt genes into corn and cotton, so the plants do the killing.

The Bt-toxin produced in GM plants, however, is thousands of times more concentrated than natural Bt spray, is designed to be more toxic,[10] has properties of an allergen, and unlike the spray, cannot be washed off the plant.

Moreover, studies confirm that even the less toxic natural bacterial spray is harmful. When dispersed by plane to kill gypsy moths in the Pacific Northwest, about 500 people reported allergy or flu-like symptoms. Some had to go to the emergency room. [11],[12]

The exact same symptoms are now being reported by farm workers throughout India, from handling Bt cotton.[13] In 2008, based on medical records, the Sunday India reported, "Victims of itching have increased massively this year . . . related to BT cotton farming."[14]

AAEM states, "Multiple animal studies show significant immune dysregulation," including increase in cytokines, which are "associated with asthma, allergy, and inflammation"—all on the rise in the US.

According to GM food safety expert Dr. Arpad Pusztai, changes in the immune status of GM animals are "a consistent feature of all the studies."[15] Even Monsanto’s own research showed significant immune system changes in rats fed Bt corn.[16] A November 2008 by the Italian government also found that mice have an immune reaction to Bt corn.[17]

GM soy and corn each contain two new proteins with allergenic properties,[18] GM soy has up to seven times more trypsin inhibitor—a known soy allergen,[19] and skin prick tests show some people react to GM, but not to non-GM soy.[20] Soon after GM soy was introduced to the UK, soy allergies skyrocketed by 50%. Perhaps the US epidemic of food allergies and asthma is a casualty of genetic manipulation.

In India, animals graze on cotton plants after harvest. But when shepherds let sheep graze on Bt cotton plants, thousands died. Post mortems showed severe irritation and black patches in both intestines and liver (as well as enlarged bile ducts). Investigators said preliminary evidence "strongly suggests that the sheep mortality was due to a toxin. . . . most probably Bt-toxin."[21] In a small follow-up feeding study by the Deccan Development Society, all sheep fed Bt cotton plants died within 30 days; those that grazed on natural cotton plants remained healthy.

Bt corn was also implicated in the deaths of cows in Germany, and horses, water buffaloes, and chickens in The Philippines.[23]

Worst finding of all—GMOs remain inside of us

The only published human feeding study revealed what may be the most dangerous problem from GM foods. The gene inserted into GM soy transfers into the DNA of bacteria living inside our intestines and continues to function.[26] This means that long after we stop eating GMOs, we may still have potentially harmful GM proteins produced continuously inside of us. Put more plainly, eating a corn chip produced from Bt corn might transform our intestinal bacteria into living pesticide factories, possibly for the rest of our lives.

When evidence of gene transfer is reported at medical conferences around the US, doctors often respond by citing the huge increase of gastrointestinal problems among their patients over the last decade. GM foods might be colonizing the gut flora of North Americans.

Scientists at the Food and Drug Administration (FDA) had warned about all these problems even in the early 1990s. According to documents released from a lawsuit, the scientific consensus at the agency was that GM foods were inherently dangerous, and might create hard-to-detect allergies, poisons, gene transfer to gut bacteria, new diseases, and nutritional problems. They urged their superiors to require rigorous long-term tests.[27] But the White House had ordered the agency to promote biotechnology and the FDA responded by recruiting Michael Taylor, Monsanto’s former attorney, to head up the formation of GMO policy. That policy, which is in effect today, denies knowledge of scientists’ concerns and declares that no safety studies on GMOs are required. It is up to Monsanto and the other biotech companies to determine if their foods are safe. Mr. Taylor later became Monsanto’s vice president.

AAEM states, "GM foods have not been properly tested" and "pose a serious health risk." Not a single human clinical trial on GMOs has been published. A 2007 review of published scientific literature on the "potential toxic effects/health risks of GM plants" revealed "that experimental data are very scarce." The author concludes his review by asking, "Where is the scientific evidence showing that GM plants/food are toxicologically safe, as assumed by the biotechnology companies?"[28]

Famed Canadian geneticist David Suzuki answers, "The experiments simply haven’t been done and we now have become the guinea pigs." He adds, "Anyone that says, 'Oh, we know that this is perfectly safe,' I say is either unbelievably stupid or deliberately lying."[29]

Dr. Schubert points out, "If there are problems, we will probably never know because the cause will not be traceable and many diseases take a very long time to develop." If GMOs happen to cause immediate and acute symptoms with a unique signature, perhaps then we might have a chance to trace the cause.

This is precisely what happened during a US epidemic in the late 1980s. The disease was fast acting, deadly, and caused a unique measurable change in the blood — but it still took more than four years to identify that an epidemic was even occurring. By then it had killed about 100 Americans and caused 5,000-10,000 people to fall sick or become permanently disabled. It was caused by a genetically engineered brand of a food supplement called L-tryptophan.

If other GM foods are contributing to the rise of autism, obesity, diabetes, asthma, cancer, heart disease, allergies, reproductive problems, or any other common health problem now plaguing Americans, we may never know. In fact, since animals fed GMOs had such a wide variety of problems, susceptible people may react to GM food with multiple symptoms. It is therefore telling that in the first nine years after the large scale introduction of GM crops in 1996, the incidence of people with three or more chronic diseases nearly doubled, from 7% to 13%.[30]

To help identify if GMOs are causing harm, the AAEM asks their "members, the medical community, and the independent scientific community to gather case studies potentially related to GM food consumption and health effects, begin epidemiological research to investigate the role of GM foods on human health, and conduct safe methods of determining the effect of GM foods on human health."

Citizens need not wait for the results before taking the doctors advice to avoid GM foods. People can stay away from anything with soy or corn derivatives, cottonseed and canola oil, and sugar from GM sugar beets — unless it says organic or "non-GMO." There is a pocket Non-GMO Shopping Guide, co-produced by the Institute for Responsible Technology and the Center for Food Safety, which is available as a download, as well as in natural food stores and in many doctors’ offices.

If even a small percentage of people choose non-GMO brands, the food industry will likely respond as they did in Europe — by removing all GM ingredients. Thus, AAEM’s non-GMO prescription may be a watershed for the US food supply.

International bestselling author and independent filmmaker Jeffrey M. Smith is the Executive Director of the Institute for Responsible Technology and the leading spokesperson on the health dangers of GMOs. His first book, Seeds of Deception is the world’s bestselling book on the subject.

His second, Genetic Roulette: The Documented Health Risks of Genetically Engineered Foods, identifies 65 risks of GMOs and demonstrates how superficial government approvals are not competent to find most of them. He invited the biotech industry to respond in writing with evidence to counter each risk, but correctly predicted that they would refuse, since they don’t have the data to show that their products are safe. 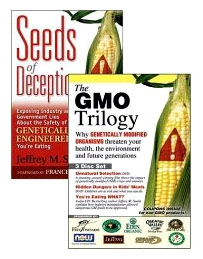 These books are available for purchase - they make excellent reading - just click on the relevant image.

[10] See for example, A. Dutton, H. Klein, J. Romeis, and F. Bigler, "Uptake of Bt-toxin by herbivores feeding on transgenic maize and consequences for the predator Chrysoperia carnea," Ecological Entomology 27 (2002): 441–7; and J. Romeis, A. Dutton, and F. Bigler, "Bacillus thuringiensis toxin (Cry1Ab) has no direct effect on larvae of the green lacewing Chrysoperla carnea (Stephens) (Neuroptera: Chrysopidae)," Journal of Insect Physiology 50, no. 2–3 (2004): 175–183.

Find out more about the genetic-modification of our crops and how to ensure that we have healthy soil so that we can grow healthy food.